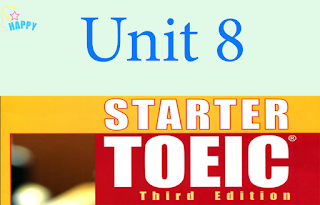 Part I. Picture Description
1. (A) The woman is listening to music.
(B) The woman is buying some CDs.
(C) The woman is holding a CD.
(D) The woman is recording a CD.
2. (A) The cassette tape is damaged.
(B) The cassette tape is brand new.
(C) The cassette tape is on sale.
(D) There are many cassette tapes on the keyboard.
3. (A) There are many fans on the stage.
(B) There is no one on the stage.
(C) There are some musicians on the stage.
(D) There are several bands on the stage.
4. (A) The guitar is in its case.
(B) The guitar is under the table.
(C) The guitar is against the wall.
(D) The children are learning to dance.
5. (A) The children are studying.
(B) The children are fighting.
(C) The children are playing music.
(D) The children are learning to dance.
Part II. Questions and Responses
1. How often do you listen on the radio?
(A) I usually listen every morning.
(B) It is not a radio.
(C) Yes, I like listening to the radio.
2. Are you going to the concert tonight?
(A) He is a rock musician.
(B) No, I couldn't get a ticket.
(C) I often go to concerts.
3. Where did you buy this album?
(A) I didn't. I downloaded these songs for free.
(B) I often buy new albums.
(C) I have about twenty albums.
4. What is your favorite kind of music?
(A) I like everything except jazz.
(B) It is my favorite kind of music.
(C) I like listening to music.
5. Have you ever been to the opera?
(A) My mother taught me.
(B) I have been just once.
(C) I didn't go last year.
Part III. Short Conversations
Questions 1 through 3 refer to the following conversation.
(M) Why don't we go to see that new musical next week? I've heard that it is very good.
(W) How about going to see a play instead? You know that I don't really like musicals.
(M) Well, how about trying this one? You know I love musicals and you might enjoy it. We
went to see a play last time, so it's my turn to see what I want.
(W) Okay, but next time I get to choose.
Questions 4 through 6 refer to the following conversation.
(M) You were great at the karaoke last night. I had no idea you had such a good voice. You should
sing more often.
(W) Oh,no. I was really out of tune. I feel a little embarrassed to tell the truth. It is a long time
since I practiced that song.
(M) Don't be silly. You are a really good singer. I wish I could sing.
Part IV. Short Talks
Questions 1 through 3 refer to the following talk.
(W) And on this week's countdown to the top of the charts, the ever-popular Boys and Girls are holding
on to their position at number three with their lead singer, Mariella, recently graduated from university?
Newcomer Evan Jones has moved up three places from number 5 with "Dance Time" He wrote the song himself
and composed the music with his brother. Now, I'm sure you have already guessed, but for the third week
in a row, the number one song is Pablo with "I'm the One". We have a big surprise for you tonight. Pablo
is here to perform live in the TV studio. Let's listen to this week's number one song. Give a big hand
for Pablo.
Questions 4 through 6 refer to the following talk
(M) I don't come from a musical instrument when I was younger. However, my eldest son Michael has just
started learning how to play the drums. He is just started learning how to play the drums. He is a big
fan of rock music and he really likes trying to copy the drummer in his favorite band. I want to encourage
him to be creative. My wife and I think it is important for our children to learn a wide variety of things
But I think it was a big mistake. He practice at nine o'clock. I go to bed at ten o'clock, so his drumming
disturbs my sleep. But he has homework to do until nine. I just don't know what to do.